There’s nothing like nuzzling with a friendly, four-legged creature that has plenty of unconditional love to share. Scientific and empirical evidence indicates that animals offer comfort and joy to isolated seniors battling with depression. While numerous pet therapy programs exist, JFCS’ Canine Corps program is unique because it fosters ongoing and meaningful three-way relationships between clients, volunteers, and their dogs. 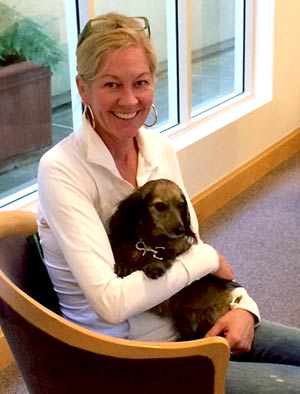 Barking up the Right Tree

For eight years JFCS has been matching trained canine companions and their owners with clients in San Francisco, Marin, Sonoma County, and the Peninsula. Like many JFCS initiatives, the program is designed to help the needy and promote community connection.

According to program director Miriam Markowitz, Canine Corps primarily serves homebound seniors participating in other JFCS programs like Seniors At Home. “This adds another important element to their care,” Markowitz notes.

Volunteer, Lindsay Joost, and her mini dachshund, Luna, live in San Francisco. “Nobody believed Luna would pass the training tests because she is so spoiled,” Joost recalled, but the pair passed with flying colors.

Joost, a homemaker and mother of three, also serves as a volunteer for JFCS’s Palliative Care program and her palliative care client is also her canine corps client. When Joost brings Luna for their weekly visit, everyone at the assisted living facility where the client lives lights up.

“Many are older and don’t get a lot of hugging or physical contact. They all want to pet Luna and tell me about their dogs,” Joost says. She (and Luna) are delighted to oblige! “Having the opportunity to make a difference in someone’s life with my little dog is the greatest gift ever,” Joost says.

Older adults eagerly look forward to the social interaction. “Many seniors today, especially those who are homebound, don’t get a lot of visitors,” Markowitz notes. Some volunteers encourage dog walking, which gets clients outside and provides some exercise. Other times, they will sit quietly indoors while seniors share fond memories that often revolve around pets.

Canine Corps client Esther, 88, lives alone. She recalls that she and her late husband, Ralph, had a dog named Frances. Although Esther loves animals, she can no longer care for one because walking is a challenge.

Actively involved in several other JFCS programs, Esther was matched with a Canine Corps volunteer. “Debbie is very warm and kind. Her dog is an adorable Bichon Frise named Billy Joel. When she comes, first we’ll talk about the dog, then we talk about personal things. The time goes really fast,” Esther says. “Visiting with them is uplifting,” she adds. “It’s very calming and comforting for me to be with Billy Joel. He loves to sleep, and I love to pet him.”

Give Paws to the Canine Corps Program

JFCS has dozens of active Canine Corps volunteers with dogs spread across the Bay Area and the program is seeking to recruit more. It is offering two training sessions beginning in February; one in San Francisco and one in Santa Rosa. Classes are led by professional trainers and spaces are limited.

All sizes and breeds of dogs are welcome—small lap dogs as well as a 110-lb. Golden Retriever currently participate in the program. In order to be accepted, dogs must be at least two years of age, have lived with their owners for at least one year, and must pass the American Kennel Club’s Canine Good Citizenship test certifying that they can safely be approached and will obey commands. The JFCS training is specifically designed to help dogs and their handlers prepare for the test.

“We are looking for easy-going, flexible, compassionate, and patient individuals who want to share their dogs with our clients for about an hour each week, for a minimum of one year,” Markowitz says.

With the help of the Canine Corps, JFCS makes sure that homebound seniors, and other isolated community members, receive the comfort and joy of connecting with a dog and a loving volunteer.

Find out more about Canine Corps and the upcoming volunteer trainings >