A True Family of Friends

Eugene and Elinor Friend set an incredible example of philanthropy for their children.

Through their involvement with various organizations in the community, they showed their deep connection to their home and their heritage.

Their story spans more than a century. As an Eastern European Jewish immigrant in New York City around the end of the19th century, Gene’s father was drawn to the western frontier, a place without barriers or discrimination. 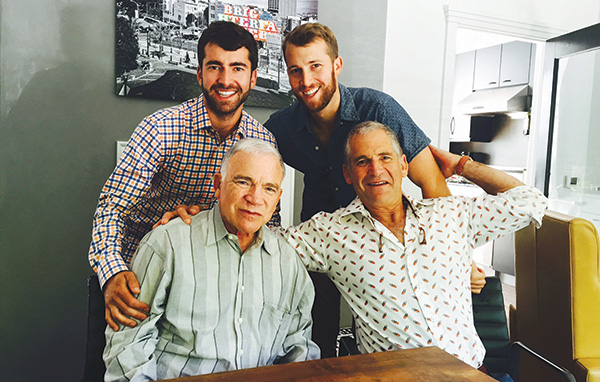 Elly moved to California from El Paso, Texas and met Gene while attending UC Berkeley. They married in 1940 and started a family. Though the two shared a passion for San Francisco and for service, they held an even stronger dedication to their family.

Through the generations the Friends have remained very close-knit, with both Elly and Gene’s sons and almost all of their grandchildren living in the Bay Area. “We love to be with one another and we have our Jewish traditions, like Shabbat, to bring us together,” says their son Donny, who along with his wife, Janie, host many Shabbat dinners at their home.

“We’ve always had a tradition of giving, because it was in our blood. Part of being Jewish is to care for others and to give tzedakah,” adds their older son Bob about his multi-generational San Francisco family.

The sons were looking for a way to honor their parents’ efforts to set an example for them and for their children. Establishing the Friend Family Children’s Fund with JFCS was a natural transition from Gene and Elly’s work and focus on family. The fund will help children who have special needs and learning differences get the treatment they need to manage and overcome their challenges at JFCS’ Parents Place.

With more than 30 years of experience, Parents Place has been helping people in our community with their most important job: raising children. Endowment funds are an important way to sustain the great work Parents Place is doing and to help it flourish along with our children. Early intervention can make a huge difference in helping children with special needs to reach their full potential, and the expert staff at Parents Place have the knowledge and training that keeps them on the cutting edge of treatment.

Now Bob and his wife, Michelle, and Donny and Janie are passing on their traditions to their children. Donny’s son Benji participated in a JFCS YouthFirst internship at the JFCS Holocaust Center during high school. His brother Jason recalls seeing firsthand how involved his now deceased grandparents were and he wants to honor their legacy. “JFCS is a great way to help people in our community. We’re making sure to set an example in a meaningful way,” explains Donny. As president of the board at Congregation Emanu-El he knows that the Talmud teaches us that, “He who teaches his children teaches his children’s children—and so on to the end of generations” (Babylonian Talmud, Kiddushin 30a).