A first taste of life in the working world hours and his pay statements.

By Olivia Perlman
Excerpts from the article originally printed in the August Issue of The New Fillmore. 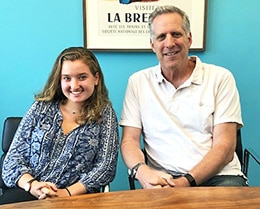 As my junior year at Marin Academy was coming to a close last spring, I decided to apply for a summer internship with Jewish Family and Children’s Services on Post Street. This paid internship program offers teens the opportunity to work with local businesses for six weeks under a supervisor’s guidance. The program also includes a weekly workshop in which the interns are taught workplace and life skills, with a focus on Jewish values.

I was drawn to the experience and community engagement but not sure what to expect, since this was my first taste of life in the working world.

I was placed at a small law firm, Breall & Breall, located on California Street near Laurel Village. I have probably walked by that red brick building a thousand times without giving a second thought to what goes on inside. The firm takes on a number of types of cases, but specializes in workers’ rights. Walking in the door were firefighters, police officers, delivery workers and others who were either injured or pursuing labor-related claims.

On my first day, I was introduced to the two lawyers who run the firm: Joe and Sophie Breall, a brother and sister who are fourth generation San Franciscans. Their sister Susan Breall is a judge on the San Francisco Superior Court. Their great grandfather Mayer Hirsch was a well-known rabbi in the neighborhood and one of the few people who could make wine during Prohibition—kosher wine, to be used in religious services.

I had assumed my summer job was going to be mostly clerical and imagined my workspace as a bullpen desk next to the Xerox machine. Instead, my coworkers showed me to an office. They handed me a 200-page transcript of a deposition from a case involving a driver who claimed he had not been properly paid, and asked me to summarize it. At first it seemed a daunting task, but I soon found I enjoyed the reading.

I went to court with Sophie for a case about a man who injured himself at work while trying to prevent a stroller from rolling down a hill. In court, she exchanged documents with the other attorney while the injured man sat for hours in the waiting room. He was eventually told there would be another hearing in a few months and that he could leave that day. I began to understand just how long it could take to bring a case to trial.

I had previously spent hours creating a week-by-week spreadsheet for the driver I learned about on my first day on the job—including his wages, regular and overtime hours, rest periods and meal periods. Joe brought me along to a hearing on the case. In the small room where it was held, I sat quietly in the corner and observed. When the spreadsheet I created was shown as evidence, it was rewarding to see my work being used.

On my last day of the internship, I got to attend the mediation of the case to see whether they could voluntarily reach a settlement. Joe and his client were in one room and the other party sat in a separate room, while the mediator went back and forth between the two. After seven-and-a-half hours of negotiation, with each side gradually making progress toward a compromise, they were able to agree on a middle ground.

I learned a lot during my weeks at the firm that I can use in my life today, including taking responsibility and developing a strong work ethic. The experience also taught me that work can be fun and that interactions with coworkers can extend beyond the office walls.

Thank You to the Donors Who Make the Summer Internship Program Possible!

To learn more about JFCS’ services to our community or make a donation to YouthFirst, please contact Barbara Farber at [email protected], 415-449-3858, or click here to give online.