Robert (Bob) Rosner and his wife, Julie Goldman, are long-time friends and generous supporters of Jewish Family and Children’s Services, dating back to when they attended classes at Parents Place. “What resonates so much for me is the combination of Jewish values and social services,” says Bob, who recently was elected to the Board of Directors. “We love that JFCS helps families and children in need and the most vulnerable of our community.”

Growing up in Palo Alto, Bob attended Congregation Beth Am. His mother was a special education teacher, and his parents raised Bob to have a strong Jewish identity. Bob graduated from high school in 1973 and returned to Kibbutz Ein Dor, where he had spent the previous summer on a “Summer in Kibbutz” high school program. A month after he arrived saw the commencement of the Yom Kippur War. What had been a casual volunteer opportunity became serious when the kibbutz faced a shortage of workers as its members were called up. 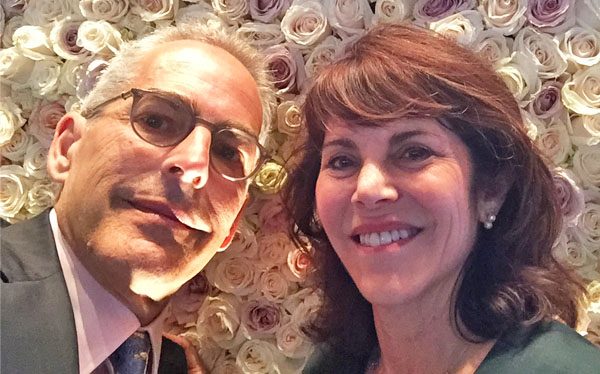 After earning his bachelor’s in economics from UC Santa Cruz and an MBA from Stanford University, Bob began a career in business and finance. Today he is the founder, managing member, and portfolio manager of Buena Vista Fund Management, an Asian-focused investment firm. Bob and Julie live in San Francisco, where they raised two sons.

In 1991, while looking for a way for his aunt’s name to live on, Bob learned about Named Endowment Funds at JFCS. By establishing the Tillie Rosner Endowment Fund, Bob and Julie created a permanent memorial to Tillie, who had polio as a child and overcame many hardships in life. “She was tough as nails,” recalls Bob, with fondness. Tillie, who never married, moved west from New York in her later years to be near her younger brother, Bob’s father, and his family. The annual distributions from the Named fund provide expert, loving home care to our frail elderly in need.

Over the years, Bob has been an active volunteer and leader on community boards and committees, including prior terms on the Board of Directors of the Urban School of San Francisco, where he served in various leadership roles, and current service on the Nominating Committee of Congregation Emanu-El, the Student & Faculty Life Committee at UCSF, the Board of the UCSF Investment Company (which manages the institution’s endowment), and the Board of Directors of 18 Reasons, where he serves as Treasurer. “Always I focus on governance: best practices, asking questions, involving the right people, onboarding,” says Bob.

Invited to join JFCS’ Program and Planning Committee in 2018, Bob’s engagement in the agency’s work has deepened. His insightful, strategic approach and understanding of the issues JFCS works to address were tremendous assets to the committee’s work, and we were delighted to welcome Bob as a new member of the Board of Directors in July.

We also are grateful for all that Julie, an esteemed art conservator, contributes as a dedicated volunteer at the JFCS Food Bank. Julie has been delivering groceries to homebound and isolated seniors since the beginning of the pandemic, ensuring our frail elderly have nutritious, greatly needed food. In addition to food, Julie brings a warm community connection to elders who often have no other visitors.

Through their caring and compassion, Julie and Bob truly are creating a better world. We are thankful for their humanitarian commitment and heartfelt dedication to our community.