JFCS Leads in a Historic Milestone for Holocaust and Genocide Education

Last week, Governor Gavin Newsom announced the launch of the Governor’s Council on Holocaust and Genocide Education—an important step forward in the fight against antisemitism and hate. The council will include state legislators, civic leaders and representatives from minority communities. 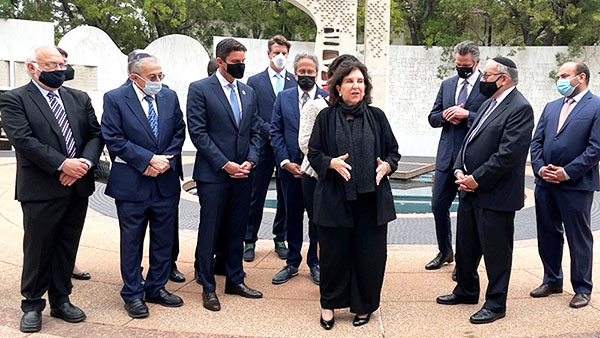 Dr. Anita Friedman, JFCS Executive Director, addresses the governor and state leadership on behalf of the JFCS Holocaust Center, which will lead on the state level to advance Holocaust and genocide education across California.

The JFCS Holocaust Center will play a critical leadership role as the state embarks on a historic expansion of educational programs that will confront the recent rise in antisemitism and other acts of hate in California and worldwide. Each year, the Holocaust Center educates over 25,000 students and teachers from over 350 schools about the causes and consequences of discrimination. As recent research by Echoes and Reflections shows, Holocaust and genocide education makes a lifelong impact on students, inspiring young people to become morally courageous adults who are better equipped to stand up to hate in all its forms.

Learn about the work of the JFCS Holocaust Center >