Siesel Maibach may still have a slight Southern accent from her childhood in Louisiana, but don’t let that fool you—she’s been in the Bay Area for many years. A successful art consultant for two decades, you can view a sample of her work at JFCS’ affiliated assisted living community, Rhoda Goldman Plaza, where she placed 350 pieces of beautiful art. Siesel has served JFCS in a multitude of vital capacities over the past 40 years. As Board President in the 80s her leadership stewarded JFCS through challenging times. Currently a member of JFCS’ Endowment Committee, she has made an estate gift to JFCS to permanently support the community for generations to come. 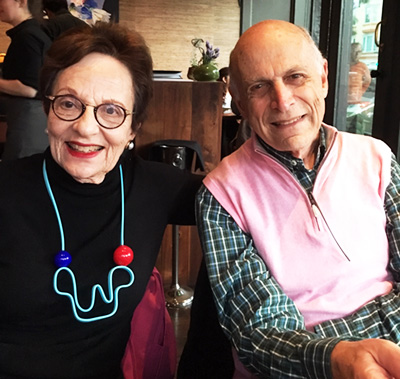 Tell us a bit about the community where you grew up and your background.
As a third-generation Southerner I was born and raised in Shreveport, Louisiana. There aren’t very many Jews in the South and my family was quite assimilated, but we still followed Jewish traditions. When I was 19 I married my husband, Howard Maibach, while I was still attending college. After he finished medical school we lived in France for two years, then the East Coast, before settling in Northern California in 1961, where we raised our three children.

How did you first get involved with JFCS?
The Jewish Federation gave a tour of all the Jewish agencies in the area and I took that tour. I was impressed that JFCS served everyone, of all ages and life cycles. Even back then JFCS was helping so many people. My involvement began soon after and I served as Board President from 1987 – 89.

What were some of the big issues facing the community when you were Board President in the late 80s?
There was a lot happening during that time and, just like today, JFCS was able to quickly change course as needed and create new programs to address the needs of the community. During my tenure JFCS began the Seniors At Home program (originally called Help at Home) because we saw the potential of serving the growing older adult population. Seniors At Home serves everyone and generates revenue by charging those who can afford to pay, while also providing subsidies for those who can’t afford the full cost of care. I’m proud that it has grown into such an incredible and popular program, serving thousands and providing practical support so that seniors can live as independently as possible as they age.

Also in the mid-80s JFCS was very involved in settling thousands of Russian-speaking emigres to San Francisco. JFCS was their lifeline, providing education, housing, job development, financial aid—everything new immigrants would need to start new lives. I’m pleased to say that many of these same emigres are now giving back as successful members and leaders of the JFCS community.

JFCS also led the way nationally by establishing the first Jewish-based AIDS project in the United States—the AIDS Family Assistance Project—which helped patients along with their loved ones, parents, and partners through the devastating crisis hitting San Francisco at that time.

How did you get involved in philanthropy?
Growing up, my parents set the example for my sibling and me about the importance of being engaged in civic projects and serving others. We were active with the Jewish community and from an early age I learned that you give what you can to support those who have less.

Why do you think that endowment giving is important?
Every social service organization needs an endowment to provide reliable support and protect it from unforeseen future financial crises—you need that cushion. My husband and I established the Maibach Family Fund for At-Risk Youth and we are also leaving a bequest to JFCS because we want to make sure that JFCS will always be there for the community and have the ability to help future generations.

What is the most rewarding part of your involvement with JFCS?
Seeing how successful the organization has become is really satisfying … It continues to grow to help even more people. It is a nimble organization, able to evolve in new directions, and it is deeply devoted to meeting the needs of the community it serves.

Anything else you would like to add?
JFCS is a wonderful organization. I’ve always kept JFCS in my heart even after all of these years. I’ve never stopped being involved and I’m hoping that I’ll never have to stop!