When asked about the secret to her long life, Hilda Richards once said, “I am definitely an optimist, and I think that has helped me very much.”

Hilda Richards z’l was a cherished volunteer, supporter, and friend to JFCS for decades.

Hilda, a true gem of our community, passed away this April at the age of 104. A resident of San Francisco for more than 84 years, Hilda was a survivor of the Holocaust. She arrived in San Francisco from Germany in 1938 with just $10, joining her sister, who had emigrated two years prior. The sisters remained close throughout their lives.

Known for her joie de vivre, Hilda was part of the fabric of this community. She had a wide circle of dear friends, generously shared her time and talents as a volunteer, and was deeply involved in Jewish life. Her career began at the San Francisco—based clothing company Koret of California, where she worked for 23 years, starting as an order clerk and rising to the position of director of merchandise distribution. 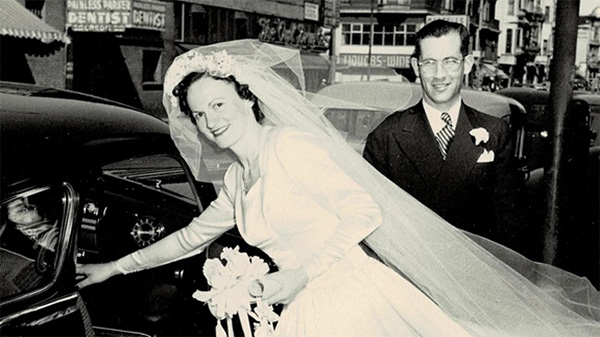 Hilda Richards and her husband, Paul, on their wedding day, April 18, 1948. Hilda passed on what would have been their 74th wedding anniversary.

As a longtime, dedicated volunteer on the JFCS’ Holocaust Survivor Emergency Assistance Program Committee, Hilda helped to ensure survivors received urgent support to live in dignity and comfort. An active, engaged committee member, she only stepped down early this year.

JFCS is privileged to perpetuate Hilda’s legacy through her oral history at the JFCS Holocaust Center. With a bequest to JFCS, Hilda continued her lifelong commitment to ensuring those most in need receive help. May her memory be for a blessing.