Tad Taube: Endowment Gift to JFCS Ensures Jewish Peoplehood at Home and Around the World 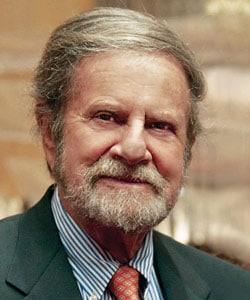 When 8-year-old Tad Taube left Poland in 1939 en route to New York via Ellis Island, the Krakow-born child didn’t know that he and his parents would narrowly escape the Nazi invasion. He also did not know that he would never return to the culturally rich and prosperous Polish Jewish community that he knew in his youth, or that this community would be destroyed during World War II.

As the war raged on, Tad and his parents would soon learn that Tad’s beloved grandfather had been murdered by the Nazis, along with many others in their family. More fortunate family members had fled their homes or had been hidden by sympathetic Poles. Tad’s sister-to-be, Nita, had been secreted in a convent run by Catholic nuns after her mother and father were murdered at Auschwitz.

Tad’s parents spent the last of their savings during their 18-month stay in New York, and decided to journey to Los Angeles in order to create a new life for themselves and their son. Esteemed professionals in Poland, they started over with almost nothing, working hard at menial jobs to build financial stability and opportunities for their family.

From Hollywood to Philanthropic Leader

Hollywood was making war-related movies and needed children who could speak Polish and German to act in them. Young Tad was discovered though a talent scout for MGM, a friend of his parents who launched him into a film career that was to help improve family finances. The career was short-lived—it did not take long before Tad’s mother decided that studio school did not provide a proper education for her son. She was proven right, because after leaving the movie business and focusing on his education, Tad was admitted to Stanford University.

At Stanford Tad cracked the ethnic barrier of what was known as a Southern-founded, exclusive “Christian club” when, in spite of disclosure of his Jewish faith, he was invited to become a pledge in Sigma Nu fraternity. Tad graduated from Stanford’s Air Force ROTC with a BS in industrial engineering and, after serving as an officer in the U.S. Air Force, returned to Stanford to complete a master’s degree in industrial management and business administration.

Tad began his career in Silicon Valley’s budding semiconductor industry. When his co-founded company went public he decided to change the trajectory of his career into real estate investment, bringing him the seeds of his eventual financial successes. His career was amplified by his relationship with the founders of Koret of California, Joe and Stephanie Koret. When the company fell into near financial ruin, the Korets implored Tad to lead the wounded company back to solvency, which he did by investing in Bay Area apartment complexes. Tad subsequently became the President of Koret of California.

When Stephanie Koret passed away in 1979, her then real estate-enhanced fortune provided the initial funding of what was to become the Koret Foundation. After Joe Koret’s death three years later, the Foundation’s corpus was significantly increased and Tad became successor President. He served in that capacity for the next 34 years.

During that 34-year time period the Koret Foundation became a major force in philanthropy in the Bay Area and Israel. Concurrently, Tad’s foray into professional sports— as founder of the United States Football League (USFL) and owner of the Oakland Invaders franchise—gave him national visibility and increased widespread support of his community activities. It was then that he launched the Taube Foundation for Jewish Life & Culture, which together with the Taube Family Foundation, now operates under the name of Taube Philanthropies. 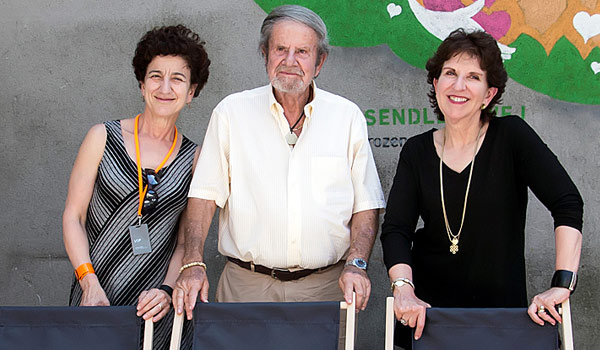 A Commitment to Jewish Peoplehood

As Tad’s philanthropic activities thrived and grew, within both the Koret Foundation and Taube Philanthropies, he used his influence to champion the causes and organizations he cares about. He supported hundreds of diverse projects in educational, cultural, civic, and communal organizations that have changed the landscape of philanthropy throughout the Bay Area, Israel, and his native Poland.

Of all of Tad’s philanthropic pursuits, it is his commitment to the advancement of the Jewish People and the preservation of Jewish culture, traditions, and history that is closest to his heart. He furthers this cause under the banner of Jewish Peoplehood.

Specifically, Tad has committed major energy and funding to reclaim Polish Jewry. He says, “After the Holocaust Poland essentially became a cemetery for the Jewish people. Supporting a Jewish ‘renaissance’ to what was just a flicker of Jewish life in Poland has become my priority.”

With the devoted professional guidance of Shana Penn, whom Tad selected as Executive Director of Taube Philanthropies, the advancement of Jewish Peoplehood has become a reality at home and abroad. Over the past 15 years the Taube Foundation for Jewish Life & Culture has promoted creative and successful programs that strengthen Jewish community and deepen connections between the Bay Area, Israel, the renaissance of Jewish life in Poland, and Jews around the world.

By making a new $25 million gift to endow support of JFCS, the JFCS Holocaust Center, and JFCS’ international collaborations in Poland and Israel, Tad ensures a robust Jewish institution locally and a close programmatic connection with Polish Jewish and Israeli organizations globally and in perpetuity.

Dr. Anita Friedman, executive director of JFCS, says, “Because of Tad’s generosity and trust in JFCS he is assuring that the history, contributions, and interconnection among Jews in Poland, America, and worldwide will continue to flourish.”

Tad notes, “I have confidence that, through JFCS, my goals for a stronger global Jewish Peoplehood at home, in Poland, and in Israel will be achieved for generations to come. JFCS is undoubtedly one of the most effective and trustworthy organizations I know.”

Learn more about the work of  Taube Philanthropies >