Starting over in San Francisco

Vera and Harold z’l Stein sat for this interview in 2019. May his memory be for a blessing.

Vera Stein’s desire to give back was born from her personal experience fleeing Nazi Germany as a young child in 1939. When Vera was just five years old, her father, Eric Livingston, was taken to Dachau following Kristallnacht. The family had already obtained visas to leave the country, so they were fortunate enough to get Eric out of Dachau and flee to the United States. They traveled by boat to New York, an experience Vera recalls being a miserable, seasick-filled journey, where they spent two months before eventually making their way to San Francisco. Eric had previously visited the city as a tourist in 1936 and had wanted to live in the City by the Bay ever since. 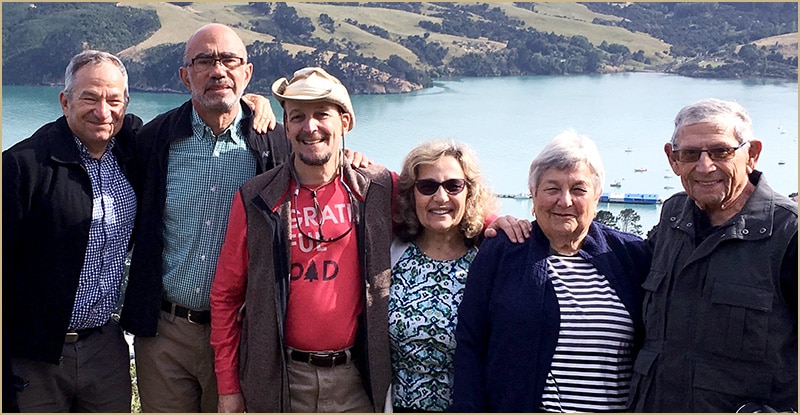 Though Eric was a chemical engineer by training, the family was penniless when they arrived. He worked several low-paying jobs before eventually finding work managing a pest control business. Even though Vera’s parents struggled early on, they believed in giving back to others in their community. Eric volunteered at what was then JFCS’ Utility Workshop, a job-creation program for refugees and immigrants that employed many elderly German-American Jews starting life over in the United States. Vera’s mother Greta regularly visited San Francisco’s waterfront with the Hebrew Immigrant Aid Society to greet Jewish refugees arriving on boats from Shanghai after World War II.

Vera met her future husband, Harold Stein (known as Hal), while attending George Washington High School, though they didn’t become engaged until years later, after she had the opportunity to “date around”, as her parents suggested. The couple was married in San Francisco in 1954. Vera first became involved with JFCS at the suggestion of her friend Norma Satten, with whom she was serving on the Sisterhood Board at Temple Emanu-El. Vera initially joined JFCS’ Loans and Grants Committee, beginning a decades-long relationship with the organization. Vera would go on to serve on several different committees and on the board for 8 years. To this day, she continues her committee participation and the couple are regular attendees at the annual Fammy Gala.

Reflecting on her experiences with JFCS, Vera fondly recalls the work that she did while sitting on the agency’s Program and Planning Committee, which she refers to as the “guts of the organization.” She enjoyed looking at what the agency had accomplished already and determining what still needed to be done. Her tenure saw the addition of the YouthFirst internship program, a program she views as essential for recruiting the next generation of leaders, the expansion of JFCS’ emigre programming, and the introduction of the first Emigre Gala. Vera has stayed involved with JFCS for so many years because she believes the organization is able to adapt to change and successfully take on programming to meet new challenges. As Hal notes, the organization “does what it says and says what it does.”

Looking to the future

Vera feels a strong obligation to carry on her family’s tradition of giving back. Inspired by the example set by her parents, she also feels a personal responsibility, recognizing that her family story could have been very different. “I’m grateful to be able to give back to others. It could have been me in Germany.” Vera has made a point of also teaching her children and grandchildren the importance of philanthropy. Vera remembers her daughter Debbie showing a desire to help others from a very young age. As a child, Debbie held an art show for friends and family in her own bedroom to sell paintings and sculptures she had created, with all the proceeds going to Mt. Zion Hospital and other charities. This desire to give back continues to this day as Debbie now sits on the JFCS board and chairs the Endowment Committee. Vera is optimistic that the youngest generation will pick up the torch and carry on the family’s commitment to philanthropy. Vera’s granddaughter, who participated in the YouthFirst internship program and the Young Professionals New Leaders Fellowship, represents the fourth generation to be involved with JFCS.

It is because of this belief in the future generation that Vera and Hal are committed to supporting the Endowment Fund. They created the Vera and Harold Stein, Jr. Endowment Fund to support palliative and end-of-life care in recognition of the care that Greta received from JFCS near the end of her life. The Steins have further committed to supporting the needs of future generations by including a bequest to JFCS in their estate plans. They believe that the youngest generation represents our future leaders, and they are happy to see this generation stepping up to fulfill this role. But in order to rely on these future leaders, Vera and Hal believe that we must invest in them and support them by ensuring the longevity of the organization.  “We have to look to the future,” Vera says, “and the future won’t exist if we don’t have an endowment.”