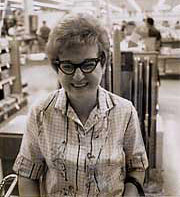 The Rabin Family Memorial Endowment Fund will help wherever the community’s needs are the greatest, today and in the years to come.

The Rabin family originally established their named continuity fund in 2004 in loving memory of their mother, Anne Simon Rabin.  When Anne’s daughter Cathy died in 2007, the fund’s name and description were modified to memorialize her as well.

Faced with raising three children alone, Anne moved her family to an apartment and struggled to support them on a secretary’s salary. Despite the constant fear of not making ends meet, she provided a stable, values-conscious, and loving home for her kids and kept them focused on their studies. She succumbed to complications of scleroderma at 63. Despite a very tough life, she never compromised her values and taught her children, by example, that they neither had to accept mediocrity nor surrender their goals.

One of these children, Cathy Rabin, born in 1955, was a recognized academic, a successful development executive in the film industry, and a brilliant writer. She was absolutely unique: independent, brilliant, loyal to her friends, stubborn, emotional, generous, eccentric, and very funny. She was also deeply troubled. She died far too soon, by her own hand, in 2007.

Shared from the Heart:
Life, misfortunes, isolation, abandonment, and poverty are battlefields which have their heroes; obscure heroes, sometimes greater than the illustrious heroes.—Victor Hugo, Les Miserables