“I’m excited to be an ambassador to younger professionals,” says Robert (Robby) Kaufman, one of the newly elected and youngest members of the JFCS Board of Directors. “There are so many opportunities to participate as volunteers and so many ways to access help.” 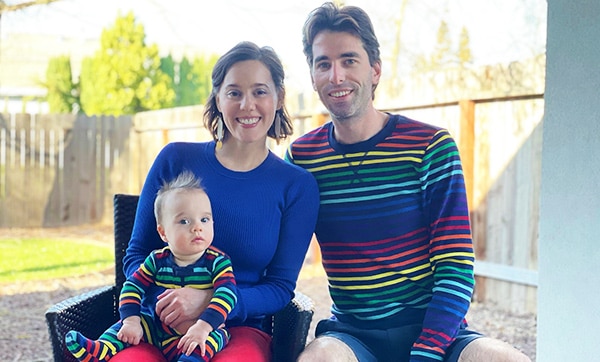 Robby Kaufman with his wife, Alissa Merksamer, and their son, Max.

Robby, the vice president of investor relations at FTV Capital in San Francisco, became involved with JFCS when researching his family’s history. Inspired by a summer 2017 trip to Poland, Robby began to piece together the experiences of his maternal grandparents, both Holocaust survivors, who had passed away. His research led him to the JFCS Holocaust Center and its 3gSF program, which serves as a forum for grandchildren of Holocaust survivors (3Gs) to meet, connect, and explore their shared history.

“The JFCS Fellowship was very comprehensive, very well-planned,” says Robby, who was selected as part of the 2018 – 2019 cohort. “I learned a lot about JFCS’ history, the programs, and who is helped. I also gained tangible leadership skills that have helped me in all facets of life.”

Among the key takeaways, he lists deepening his listening skills and learning to work with people who have diverse leadership and communication styles. The knowledge has helped him professionally, as a board member at Berkeley Hillel and Jewish Community High School of the Bay, and as a member of the AIPAC National Council. Robby also valued thought-provoking sessions with renowned scholars through JFCS’ partnership with the Shalom Hartman Institute.

The capstone to the program was the JFCS Fellows Israel Study Tour in summer 2019. The Fellows, along with their partners and a select group of JFCS’ young professional leaders, studied with the Hartman Institute’s Community Leadership Program in Jerusalem, met with elected officials in the Knesset, witnessed daily life and social support systems around Israel, and attended briefings with cultural, social service, and business leaders. Robby’s wife, Alissa Merksamer, a talented writer and educator, participated in the trip and later joined the 2019-2020 cohort of the New Leaders Fellowship.

In 2020, Robby and Alissa became parents. With Max, now one year old, they enjoy participating in virtual events with other local families hosted by Jewish Baby Network, a program of JFCS’ Center for Children and Youth.

Stories of Max have brought cheer to the homebound senior that Robby regularly calls as a volunteer with JFCS’ Safe At Home program. “He loves hearing about the baby,” says Robby, who in turn has gained greater insights into the challenges of aging.

“JFCS offers so much to the community. The more I learn, the more impressed I am,” says Robby.

We are thrilled to welcome Robby to the JFCS board! With all that Robby has accomplished as a leader already, we know his knowledge, dedication, and compassion will benefit our essential work on behalf of the children, families, and elderly of our community.

JFCS’ New Leaders Fellowship is taking applications for our 2021-22 cohort! Apply or Nominate a Fellow here>