The Mitzi and Adolf Wilner Memorial Fund was established by Susan Wilner Golden in loving memory of her parents. 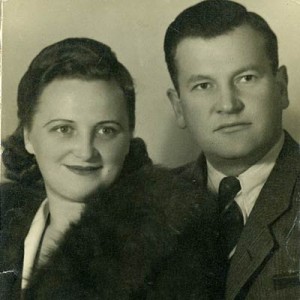 Adolf and Mitzi were married in Lvov, Poland, on November 28, 1944, having survived the last few years of the war together. Adolf had immigrated to Palestine in 1934, and returned to Poland in the summer of 1939 to attend a family wedding. With the outbreak of the war, he was caught in Poland, unable to return to Tel Aviv. During the war, Adolf was hidden in the basement of a home where Mitzi worked serving meals to German soldiers who occupied Lvov. Mitzi pretended to be Christian throughout the war, and was able to survive in part because of her blonde hair and blue eyes, her grit and unshakable belief, and her friendship with Stefanya Patecka, who was Catholic and gave her “papers” and a name to use. Mitzi and Adolf lived in Europe after the war, and immigrated to the United States in 1947. Together, through many hard years, they rebuilt their lives and started their family and had children, grandchildren, and great-grandchildren.

Mitzi lived in San Francisco for over 10 years, during which time she was active in the Speaker’s Bureau of the Holocaust Center of Northern California, educating hundreds of school-aged children about the perils of prejudice and the need for tolerance. Her unique soul touched hundreds of lives throughout the Bay Area, and most significantly those of her granddaughters, Amanda and Jenny.

Even at very young ages, both Amanda and Jenny understood how extraordinary their grandmother Mitzi was, and admired her resilience throughout her life. Mitzi spoke to Amanda’s classmates at her school when they studied the Holocaust, and inspired Amanda to interview and videotape her grandmother for future generations. Jenny lovingly wrote about Mitzi in second grade for a project about her ancestors, and described the heirloom she received from her Bubbe in a school report: “The heirloom I inherited from my Bubbe was her blonde, curly hair and blue eyes, and her courage and bravery.“

Mitzi frequently lived with Amanda and Jenny while she recuperated from her many hospitalizations. Mitzi always found great joy laughing with and hugging Amanda and Jenny, who kept her young for so many years. Mitzi died at the age of 91 in January 2009. Although Adolf died many years before they were even born, Amanda and Jenny both learned of his story and of the perseverance and determination he had to build a new life in America for his family. Adolf died in 1972 at the age of 64, and Amanda is named for him. Jenny was named after Mitzi’s brother, who was a medical student in Sienna, Italy, when the war broke out.

The Mitzi and Adolf Wilner Memorial Fund is established to help create outreach and educational programs for the Next Generation—the grandchildren and future descendants of Holocaust survivors who were raised or live in Northern California, so that they may continue to honor the legacy of courage, resilience, and determination exemplified by the survivors. Each survivor’s story needs to be remembered, to honor their memory and of those who perished, but also to recall the enormous courage they possessed, which enabled them to both survive and to rebuild their lives.