My grandparents and parents were always involved in San Francisco’s Jewish community,” says Jeff Hyman, who was elected to the Board of Directors of Jewish Family and Children’s Services (JFCS) in July. “Through their example, I was raised to give back and be of service.” 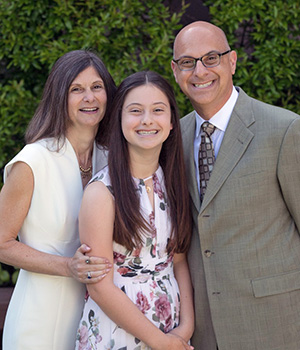 Jeff Hyman and Hillary Weingast, with their daugter

An attorney with extensive legal and executive experience at leading Silicon Valley technology companies, Jeff is CEO of LWD Advisors, Inc. A graduate of Santa Clara University’s School of Law, where he currently serves as an adjunct professor, Jeff has contributed thousands of hours of pro bono legal service throughout his career. He has served on the boards of OneJustice and the Legal Aid Society of San Mateo County, as well as the leadership of his synagogue, Peninsula Temple Beth El, in San Mateo. Jeff is also the coach for Menlo School’s junior varsity mock trial team.

“For me, volunteering is an important component of a well-rounded life,” he says. “I can’t imagine not making time to contribute.”

Hillary Weingast, Jeff’s wife, also has a distinguished record of nonprofit board and volunteer service. Her experience as a volunteer mentor for JFCS’ YouthFirst program more than fifteen years ago sparked the family’s involvement with the agency. Today, Hillary serves as chair of Next Door Solutions to Domestic Violence’s board and is the president of the California Conference of Women.

While Jeff knew about JFCS since childhood, he was surprised to discover the breadth of programs. “JFCS offers vital resources to people at many different stages of their lives,” says Jeff. “Many of these services resonate deeply with my family—from teen mental health, to services for survivors of domestic violence, to offering support and services to families in need of dementia care and beyond.”

After Hillary’s time as a mentor ended, the couple remained involved as donors and occasionally participated in family volunteer activities with their daughter, Sierra.

In 2021, Jeff completed eleven years of meaningful service on the board of Peninsula Temple Beth El, including terms as president and treasurer. When he considered how he would like to serve the community next, he quickly thought of JFCS. He joined the Program and Planning Committee in January.

“The first committee meeting was so inspiring and moving as we learned about the growth of JFCS’ Shupin Independent Living Community for young adults with developmental disabilities,” says Jeff. “What I learned at each subsequent meeting underscored my desire to become more involved in JFCS. I was honored to be invited to join the Board of Directors.”