We recently sat down with Doug to talk about his time with JFCS and what motivates him to be a leader in the Jewish community. 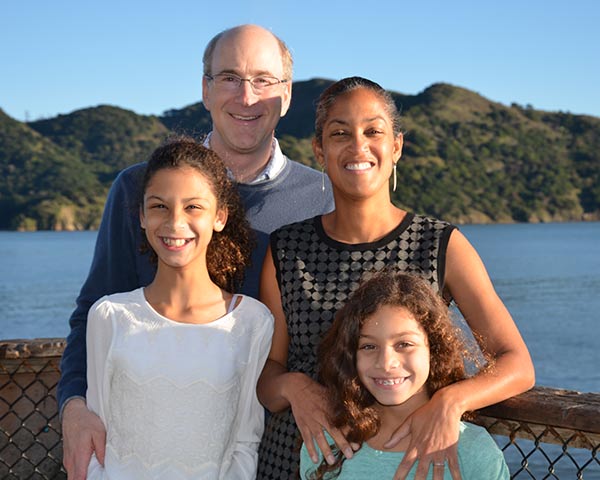 Doug Winthrop with spouse, Dr. Yamilee Bermingham, and their daughters.

How did you become involved with JFCS? What impressed you?

After I moved to the Bay Area in 1995, I was looking for involvement in the Jewish community here. One of my law colleagues served on the Public Issues Committee at JFCS, and she invited me to join. The more time I spent on the committee, the more I became impressed with JFCS’ depth, breadth, and quality of the services. JFCS speaks to all aspects of life. Though it is informed by Jewish values and serves the needs of the Jewish community, it also serves the broader community—both Jewish and non-Jewish—which is really important for my family.

When Yamilee and I became parents, JFCS’ Parents Place played an important part in our lives. We benefited from the parenting workshops as we raised our daughters, who are now 15 and 17.

You joined the Board of Directors in 2007. What stands out to you from your years on the board so far?

No matter what the crisis is, JFCS responds—and responds quickly and thoughtfully, with compassion and real resources. I’ve seen that in the Great Recession, the North Bay fires, and, most recently, during the COVID pandemic. And that’s on top of the everyday work to help people in need.

As President of the Board, what are your priorities for the year?

Our top priorities are to continue meeting the acute needs of the community during the pandemic as long as this is needed and then to make the transition out of emergency services and back to more normal times. It also is a priority to continue with initiatives JFCS has undertaken. The expansion of services on the Peninsula and of services for youth, through the Center for Children and Youth, are both super-important.

You and your wife, Dr. Yamilee Bermingham, established a Named Endowment Fund, the Jean-Helios Bermingham & Sherman Winthrop Family Fund, in memory of your fathers. Why do you believe it is important to give to the JFCS Endowment?

For us, it’s a way to pay tribute to two people who were and are very important in our lives. At the same time, our fathers would have been quite pleased that their names are associated with the great work of JFCS.

What motivates or inspires you to take on such leadership roles in the community? What does it mean to you?

People come to JFCS and become involved for different reasons. We’re fortunate that the agency’s work is compelling for people across the spectrum and that we have many ways to participate.

For me and my family, we love that JFCS takes care of our Jewish community and the broader community and does this with the perspective of tikkun olam. That resonates for us.

What would you like others to know about the importance of giving back?

I devote my time and resources to JFCS, and I always feel like I come away with more than I have given. For example, leaving a board meeting, I often feel I have a better understanding of issues that affect the Jewish community and our Bay Area community as a whole. I also appreciate knowing I am doing some small part to help.