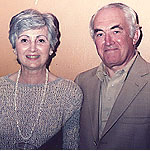 Established in 1997, the Joyce and Ernest Lampert Endowment Fund helps make it possible for needy seniors to receive the homecare services they require to remain living safely and independently in their own homes for as long as possible.

By creating their named continuity fund at JFCS, the Lamperts honor the memory of their parents in a perpetual and meaningful way.

Freda and Max Steinberg, Joyce’s parents, had immigrated to Toronto from Russia when both were quite young. Once grown and married, Max went into the ladies’ clothing business, while Freda stayed home to raise Joyce and her two brothers. Around the same time, Ernest Lampert’s Rumanian-born mother and Austrian-born father also immigrated to Toronto as very young children with their respective parents. His mom, Bella, raised Ernest and his brother, while Ben pursued a career in men’s clothing.

A generation later, Ernest himself emigrated from Canada to Texas to train as a surgeon. Having come to San Francisco to take a board exam, he liked the Bay Area so much that he returned upon completion of his schooling and set up his medical practice here. In 1954, Joyce also moved to the city as Ernest’s bride. Today, after more than 50 years of married life, the Lamperts are the proud parents of two sons and four grandchildren.

Because Joyce’s mother, Freda (nicknamed Fritzi) lived to age 96 and was fortunate enough to spend her final years in a retirement residence where she received very good care, the Lamperts earmarked their fund to ensure that other seniors benefit in this way during their elder years.