John Levin is a long-time JFCS partner and supporter. His mother, a polio survivor, showed him firsthand how persons with disabilities can overcome obstacles to reach their highest potential. John’s instrumental and inspiring leadership paved the way for the creation and growth of JFCS’ highly regarded Disabilities Services Program, which has served thousands of children and adults with disabilities and their families.

John is the Chairman and Co-Founder of the law firm Folger Levin LLP. His incredible vision has created a lasting national impact. His far-reaching honors in public service include the National Public Service Award from Stanford Law School, the Dean’s Medal from Stanford School of Medicine, its highest award for humanitarian achievement, and the Gold Spike from Stanford University, its highest recognition of volunteer leadership. 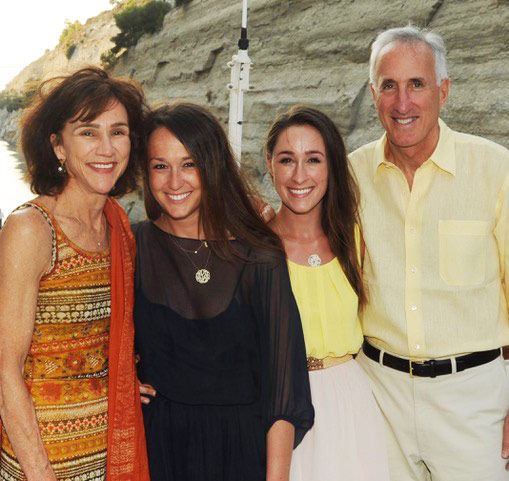 Terry and John Levin with their daughters (center)

Tell us a bit about the community where you grew up and your background.

I grew up in Southern California. When I was three years old my mother contracted polio and became fully quadriplegic. Among my earliest memories are visiting her in a hospital ward where she was confined to an iron lung. Years later I watched her complete college as one of the first fully quadriplegic students to matriculate at UCLA, and then go on to earn a master’s degree and have a career as a psychiatric social worker. My mother found great happiness in being an engaged member of the community and in being able to be of service to others. I was profoundly influenced by her ability to focus on her capabilities rather than her limitations and to serve the public good.

How did you first get involved with JFCS?

Because of my mother’s experience I became very interested in a variety of ways to advance the welfare of people with disabilities. In the early 1990s I met with Anita Friedman and asked her what the agency was doing in this area; I was surprised to discover that very few resources were available or used for that purpose at the time. Based on our conversations, I became convinced that JFCS would be a highly capable partner, and my wife Terry and I made a small endowment gift to seed programs for people with disabilities in memory of my mother—the Terry & John Levin Endowed Fund for Persons with Disabilities. Since then we have been grateful and enthusiastic donors and thought partners as JFCS has continued to enhance its impressive and impactful capacities in a service area that we feel is very important.

Tell us about your thoughts on philanthropy and public service.

Being of service to others was instilled in me early in life. In my experience—professionally and personally—to do well actually requires you to do good. By giving and sharing in the ways we can, we can each help make the world a better place, creating a more successful and just community for us all.

JFCS is a remarkable institution. Terry and I have the utmost respect and appreciation for the very many ways JFCS addresses the needs of the underserved in the Bay Area and, in doing so, provides a great example for others around the country.