Upon receiving the news that he had been chosen to receive a scholarship by JFCS’ Financial Aid Center, Avery Cruz was at a total loss for words. But his mother, Deborah, was able to find some, saying, “You have no idea what this means! I was so worried about how we were going to afford college next year.”

Avery and Viviane Lorvan, the two recipients of this year’s Vivienne S. Camp Scholarship, awarded annually, embody the most admirable aspects of the next generation of the Jewish community. Their resilience against adversity, coupled with their commitment to academic growth, made them ideal candidates in the eyes of the selection committee. 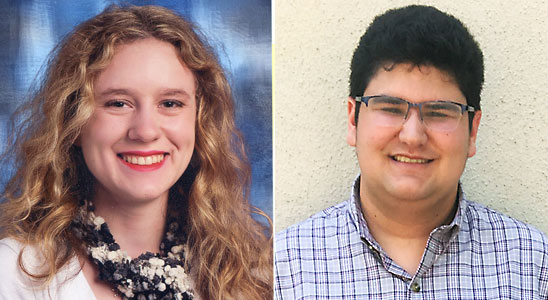 Both Avery and Viviane grew up in single‐parent homes that taught each of them the value of sacrifice and commitment at an early age. After spending his childhood in Guerneville, attending several different public and charter schools, Avery was drawn to San Francisco’s Jewish Community High School (JCHS), fulling his childhood dream of attending a Jewish high school. His mother rented out their home in Sonoma County to help pay for a small apartment in Marin, allowing Avery to be closer to school for his first two years.  After falling on hard financial times, Avery and his mother moved back to Guerneville during his junior year, where Avery’s commitment to his the tight‐knit community of JCHS carried him through his long commute to school. During this time, Avery also worked part-time at his local Safeway.

Viviane spent her early years in the South Bay, raised by her mother in her grandparents’ home. When her mother was diagnosed with cancer, Viviane stepped up and helped her teach Pilates classes to cancer survivors. She also took a heavy load of classes each semester while working multiple part-time jobs as a nanny, dog-walker, and receptionist at a beauty parlor to help save for college.

Commitment to Academic and Personal Growth

Each candidate demonstrated a strong commitment to academics and extra-curricular activities. Viviane graduated a year early from high school with excellent grades. She will be attending Mills College, and is pursuing a career in aerospace engineering. Her sights are set on a job at NASA one day. Avery will be attending Sonoma State University majoring in geography, and besides his regular studies, he has a passion for aviation and hopes to earn his pilot license. He also enjoys giving back by fostering rescue dogs and participating in creek clean-ups.

Their commitment to academics is matched by their reverence for Judaism, which they both view as a strong piece of their identities.

“A great deal of the young woman I am today is due to my time at my synagogue,” says Viviane, “Whenever I need a place to be calm and collect my thoughts, there is always a place for me to go.”

Avery shared similar sentiments, “When I meet somebody new, one of the first things I share is that I’m Jewish, and I say it with great pride.”

Strong Ability to Connect With Others

Michelle Lamphere, Director of JFCS’ Financial Aid Center, highlighted each candidate’s capacity for empathy as unusual for people in their age group. Viviane is considered a mother figure in her group of friends, and is often admired for her independence and willingness to take risks. After attending L’Taken, a teen conference in Washington D.C., Avery developed a strong sense of social justice and became committed to improving his community through tikkun olam, the Jewish concept of healing the world. Avery says, “I wish to continue fighting for justice and change, both in my community, my country, and in the world.”

To donate to the JFCS scholarship program, please contact Barbara Farber at [email protected], 415-449-3858, or click here to give online.