For 30-plus years Carl Grunfeld, MD, Ph.D, has been a well-loved and deeply knowledgeable JFCS supporter. He and his family have strengthened the organization in significant ways that will continue to be felt for generations. Carl is treasured by JFCS clients and staff, and he humbly acknowledges, “I’ve pretty much done whatever JFCS felt I could contribute to doing.” Carl has been a member of the Board, the JFCS Palliative Care Taskforce, and the Loans and Grants Committee, as well as chairing the Ethical Care Committee. He has even taught Russian emigre teens how to bake desserts!

As an internationally distinguished physician and researcher, Carl brings to JFCS his integrity, sensitivity, and an expert’s discerning wisdom on all things related to patient care—and particularly care of the aged. He is currently a Professor of Medicine at UCSF and Chief of Endocrinology and Metabolism and Associate Chief of Staff for Research and Development at the Department of Veterans Affairs Medical Center, San Francisco. Carl rejoined the JFCS Board this year as his role as past-President of the Board of Directors at Rhoda Goldman Plaza was winding down, and says, “I’m coming back to the Board that I love so much, JFCS’.” 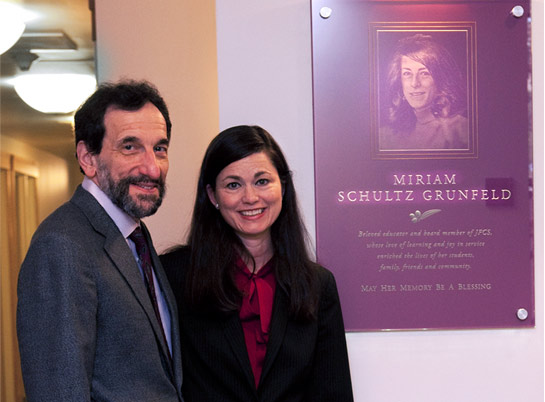 Tell us a bit about the community where you grew up and your background.

I grew up in Philadelphia in what at the time was a very intellectual Jewish community. My parents were not observant, but we did attend a large conservative synagogue, Temple Har Zion. I got involved in United Synagogue Youth early in high school and was lucky to be at Har Zion during a very dynamic time. The synagogue appointed a youth rabbi who was the first scholar-in-residence. The rabbi was none other than a young Chaim Potok, who would soon become a very famous Jewish author!

My father always instilled in me the belief that we should give back to the community and that charity is extremely important. Sadly, he took ill when I was a pre-teen and for most of my growing-up years he was disabled, so we didn’t have much to give. We lived on my mother’s salary as a school secretary while I went to school on scholarships.

Tell us a little bit about your long history with JFCS.

My involvement began through my first wife, Miriam Schultz Grunfeld z’l. She joined the Board in the 80s and I still remember her coming back from her first Board meeting incredibly impressed with what the agency accomplished, especially with the staff. She was passionate about JFCS and involved in a number of different activities for many years.

In 1992 Miriam developed brain cancer and was quite incapacitated. The only activity she kept up with while she was ill was her role on the Board. She died in March of 1994 and, as part of her memorial, I created the Miriam S. Grunfeld Scholarship Fund for Youth. Miriam absolutely loved to support the education of young people and I knew this would be a fitting tribute.

Miriam’s parents, Albert and Janet Schultz z’l, were looking for a way to memorialize Miriam and they discussed it with me. I knew that whatever they did should include JFCS. They established the Miriam Schultz Grunfeld Professional Building Endowment Fund for their beloved daughter. They were instrumental in the creation of the beautiful JFCS main office building and why it bears her name.

I remained an active member of the JFCS community and eventually joined the Board myself. Ten years after Miriam died I re-married and, rather than accept wedding gifts, my wife, Gay, and I asked people to contribute to charities to celebrate our wedding. We established the Grunfeld Family Fund for Children’s Services.

Has JFCS helped you or have you used the services in some way?

In their last years Miriam’s parents received excellent round-the-clock homecare services from JFCS’ Seniors At Home. They were both able to be at my wedding with Gay and we remained very close until their passing.

I have three stepchildren and the younger two completed YouthFirst’s Summer Internships. My stepson, William, participated in the JFCS Holocaust Center’s Next Chapter program and made a wonderful connection with a local Holocaust survivor who was a fellow musician. The two remained close after the program ended and he attended William’s high school graduation. William also volunteered to organize the San Francisco JFCS Food Pantry.

Gay and I have also used JFCS’ Cleanerific to keep our home sparkling clean for years. The fact that JFCS’ high-quality cleaning service creates jobs for people and provides them health care benefits is superb.

What is the most rewarding part of your involvement with JFCS?

I love to see the cycle of giving unfold. Students who received scholarships and loans from JFCS’ Financial Aid Center have now begun to give back. Those that JFCS helped resettle in the U.S. from the former Soviet Union through the Emigre Program are now very involved in leading and supporting the agency—it’s incredible. JFCS does things that are unique, visionary and inspiring.

I know what it is like to grow up poor and with serious illness in the family. This taught me lessons about the importance of giving back that I’ll never forget.