Continuing a Family’s Commitment to Repairing the World

“JFCS has helped my family and countless others in times of need,” says Howard S. Hahn, when reflecting on his recent decision to leave a legacy to help others facing hard times. “My parents raised me with Jewish values. Tikkun olam was especially important.” 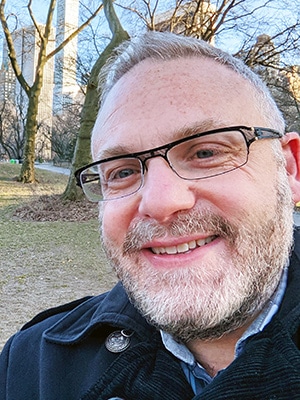 Howard S. Hahn lives the value of tikkun olam, which he learned from his parents.

A native of New York City, Howard arrived in San Francisco for a visit not long after he graduated from college. He found a city and community he wanted to get to know better. “I never used the roundtrip part of the paper plane ticket,” Howard says. “I quit my job over the phone and stayed.”

He became an active member of our San Francisco community, joining a synagogue and volunteering his time to causes close to his heart. In 2010, Howard learned about opportunities to volunteer in JFCS’ Palliative and End of Life Care program. He completed the training and embarked on an experience that would be profoundly meaningful for Howard—and his clients.

For more than three years, Howard shared his time and heart to offer companionship, compassion, and presence to community members faced with serious health challenges. One of Howard’s clients was a Holocaust survivor coping with difficult memories of her time in hiding that had surfaced as she neared death. Howard’s parents were Holocaust survivors, and he had grown up hearing stories and witnessing the effects of the Holocaust on his parents and others in their synagogue and community. The depth of empathy and understanding he offered helped to bring ease to this survivor.

“Howard brought deep sincerity and a good heart to his time with clients (who loved him!) and to our community of volunteers as well,” says Rabbi Daniel Isaacson, JFCS’ Director of Spiritual Care Services.

His volunteer service convinced Howard, then working in corporate marketing, that he was ready to make a career change. He enrolled in UC Berkeley’s Master of Social Work program and completed the rigorous requirements to become a Licensed Clinical Social Worker (LCSW) specializing in gerontology. He has focused his second career on providing emotional support and education to families experiencing complicated and emotional dementia diagnoses.

Howard’s connection with this work became even more personal when his mother was diagnosed with Alzheimer’s disease. At Howard’s urging, his parents agreed to leave New York and move into the apartment below his own, bringing the family together again for this critical time.

Howard reached out to JFCS’ Seniors At Home program for help with expert, loving care for his parents. “The delivery of meals especially was instrumental,” Howard says. The delicious kosher meals helped ease his parents’ transition to their new home. As he and his father coped with the progression of his mother’s disease, they felt taken care of by the Seniors At Home team, too.

“Caregivers need a lot of support, and I appreciate that JFCS recognizes that,” says Howard. Following his mother’s death, meals and other supportive services offered trusted help during his father’s remaining years.

As Howard began to think about ways to honor his parents’ memories while also continuing their commitment to repairing the world, he decided to include a gift to JFCS in his estate plans. In the future, this bequest will establish a Named Endowment Fund in memory of Howard’s parents, Helga and Fred, and his great-aunt, Hedwig Plaut, a Holocaust survivor who also developed Alzheimer’s. For generations to come, the fund will support services for seniors in need through Seniors At Home’s Center for Dementia Care and Palliative and End of Life Care program.

“I know how great JFCS’ services for seniors with dementia and end of life are,” says Howard. “It feels very meaningful to leave a legacy that will help others.”