A Young Woman’s Journey Through Illness, Orthodox Conversion, and Marriage

At the age of 25, Vy Nguyen was diagnosed with an extremely rare and aggressive form of cancer. Vy had been raised Buddhist, but when a Buddhist hospital chaplain told her that her cancer was caused by “bad karma”, she decided to meet with chaplains of other faiths. One of them was Chaplain Bruce Feldstein, MD, BCC, founder and director of JFCS’ Jewish Chaplaincy Services serving Stanford Medicine, and Adjunct Clinical Professor at Stanford University School of Medicine. 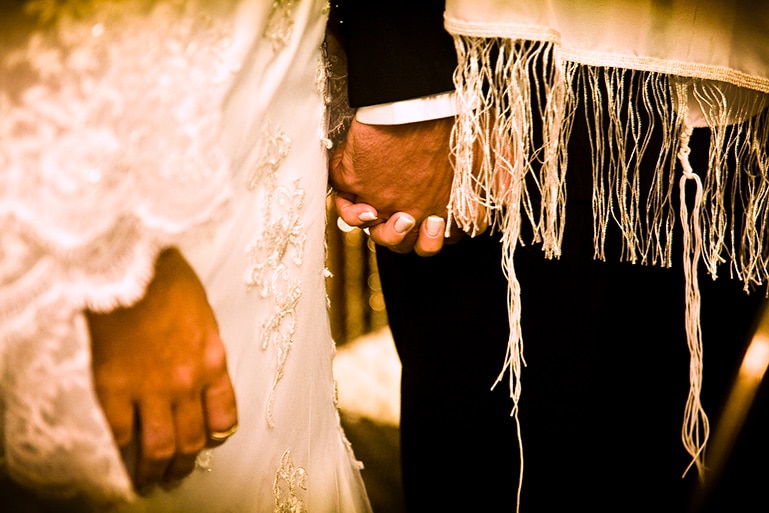 While it is the doctor’s job to cure a patient’s disease, Chaplain Feldstein has said, it falls upon him to take care of her soul.

A Catholic chaplain had talked about the afterlife, and Vy’s search led her to wonder what the Jewish tradition had to offer. “Vy was not interested in (the afterlife),” Chaplain Feldstein says. “Vy’s a l’chaim kind of person. She’s a here-and-now, all-about-living kind of person.”

After several meetings with Chaplain Feldstein, Vy decided she wanted to die as a Jew. And an Orthodox one at that. She began by searching for resources on Yelp. She started an Orthodox conversion, a process that forced her to change her entire life—while she endured continued hospitalizations and surgeries—and finally took her to the mikvah and then the wedding chuppah, where she married long-time fiancé Andrew Koller. Her rabbi called her “one of the most devoted students he had ever had”.

Says Chaplain Feldstein, “I am privileged to know her and be changed by and with her.”

The full story of Vy’s dramatic journey and an interview with Chaplain Bruce Feldstein were featured on Unorthodox, the podcast. Listen to Vy’s story, beginning at minute 57:30, here >