A Philanthropic Legacy—Past, Present, and Planned

“We are interested in providing this legacy because of the great work JFCS does in providing for the wide range of needs within our community—youth, parents, adults, and seniors.” With these words Board member Alex Ingersoll and his husband, Martin Tannenbaum, a strategic planning, business, and training consultant to the agency, notified Jewish Family and Children’s Services that we are one of three major beneficiaries of their estate plan. Their significant commitment has been shaped by each man’s life-long exposure to, and belief in, the importance of philanthropy.

Alex, who grew up on a dairy farm in upstate New York, saw his parents tithe $2 every Sunday to the Dutch Reformed Church they attended. When, as an adult, he fell in love with a Jewish man, he learned first-hand about the values of tzedakah and chesed during the four years they lived in Israel. 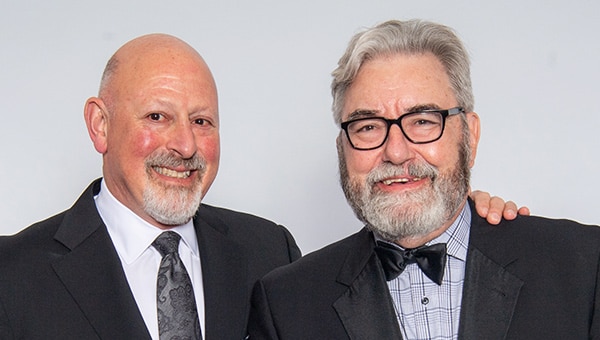 When the pair moved to San Francisco in 1979 Alex was “Jewishly knowledgeable” and, due to his Hebrew language and challah-baking skills, was assumed to be Jewish by his fellow Sha’ar Zahav congregants. As part of their immersion in their new community, the couple made a “stretch gift” toward the purchase of the synagogue’s first building, a wooden edifice in the Castro, and then stretched again for the current building at 16th and Dolores. Alex, who worked as a law firm administrator until he recently retired, formally converted to Judaism in the 1990s, served as Sha’ar Zahav’s president, and celebrated his adult Bar Mitzvah in 2012.  Through the years he (now along with Martin) has continued to make Sha’ar Zahav a major recipient of his charitable giving.

While Alex is a convert to Judaism, Martin grew up Jewish in a small but vibrant community in Salt Lake City, where his family settled in the late 1800s.  As he notes, his parents at one time or another held leadership posts in every major Jewish organization in the city and contributed generously to all of them. He laughingly remembers the day that his father came home and announced that he had donated the money they had been saving to transform their basement into a den to the capital campaign for a new JCC, an organization that is still a beneficiary of Martin and Alex’s philanthropy.

Although he had been awarded a scholarship to the University of Utah, Martin’s parents insisted that he pursue his further education on the East Coast to broaden his horizons.  While he was leaning toward Brandeis—partly because the school had a large African-American enrollment and he was interested in experiencing racial diversity—he went to Harvard because, as his father noted, “How do you say ‘no’ to Harvard?”

After earning a degree in English and psychology and his MBA from Boston University, Martin spent two decades in the corporate world.  But, as a gay man, he didn’t feel fully comfortable on this career path. He joined GLAD (GLBTQ Legal Advocates & Defenders), whose mission is to use strategic litigation, public policy advocacy, and education to create a just society free of discrimination based on gender identity and expression, HIV status, and sexual orientation. While serving on the board, he spearheaded fundraising and donated all of his Merrill Lynch stock to underwrite the organization’s campaign to legalize same-gender marriage. He later served as national board chair of Keshet, which works for full LGBTQ equality and inclusion in Jewish life.

The two men met in Provincetown, Massachusetts at Thanksgiving 2003 and the following year began a transcontinental relationship, culminating in their drive from Boston to San Francisco in 2006, with Martin’s dog and one of his favorite art pieces. It was at Sha’ar Zahav that Martin met Jerry Rosenstein z’l, a long-time friend of JFCS who had originally introduced Alex to the agency; upon learning of Martin’s background in business development and innovation, Jerry arranged a meeting with JFCS’ executive director Dr. Anita Friedman, “the most entrepreneurial person I know.”

The two obviously hit it off, as ever since that meeting Martin has worked with our agency, providing strategic advice, as well as Jewish and business learning, to JFCS employees and leadership.  Meanwhile, Alex, who has long been involved, attending the annual Fammy Galas and participating in an early LGBT task force, has served on our Board of Directors since 2014 and currently chairs JFCS’ San Francisco Loans and Grants Committee.

The men, who married in 2008 on a bluff overlooking the harbor in Provincetown, site of their initial meeting, continue to increase their philanthropic giving—to LGBTQ organizations, Sha’ar Zahav, the Salt Lake City JCC, JFCS, and other causes that are personally meaningful to them—as their personal financial resources have grown. They also continue to add to their JFCS Named Endowment Fund, the Larry Tannenbaum Legacy Fund, established to support opportunities for teens to become committed Jewish leaders, a cause that was important to Martin’s late brother.

By establishing a second Named Endowment Fund—the Alex Ingersoll and Martin Tannenbaum Family Endowment Fund for services where most needed—through their bequest, the pair not only honor their status as a same-sex, Jewish family but proclaim their ongoing determination to make a real difference in the lives of people and the community, today and in the future.