“JFCS is very close to my heart,” says former board member Harry Cohn.  “When my family came to San Francisco from Germany during World War II, the Eureka, as JFCS was known then, was very helpful to us.”

The agency arranged for Harry’s family to rent an old Victorian on Divisadero Street for $18 a month and made sure there was a bottle of milk on the doorstep every morning.  His father worked in Butchertown, and his mother did catering. Harry worked at the neighborhood drugstore and delivered newspapers to make ends meet. 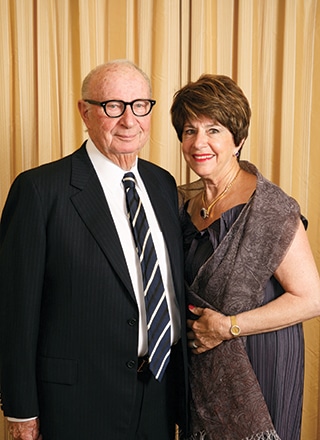 “I remember coming to 1600 Scott Street to get my first pair of long pants—Levis,” laughs Harry, who got his start in business with a part-time job at Levi Strauss.  He rose quickly from the stock room to the board room, ultimately becoming president of the Men’s Division before he retired and opened the Fallenleaf Winery.

Harry learned about more than the apparel business at Levi Strauss & Co.  “I admired the philosophy and philanthropy of the Haas and Koshland families,” says Harry, who has also generously given his time, talent, and business skills to help the community.

“I am a child of the Holocaust,” he says.  “It’s very important to me to perpetuate Jewish continuity, family, culture, and tradition.”

To do just that, Harry and his wife, Judy, have created a Donor Advised Fund at JFCS.  Such a fund allows donors like the Cohns to sign a simple letter of agreement, make a tax-deductible contribution, and then make ongoing recommendations about distributing the Fund’s principal and earnings to charities of their choice.  JFCS acts as steward for the contributed funds, investing them for both growth and income. When donors make their recommendations for disbursement, JFCS ensures that the selected charities meet accepted standards, writes the checks, stamps the envelopes, and puts the gifts in the mail.

“I have interests in so many organizations in San Francisco.  For me it’s a lot easier to donate through my JFCS Fund,” notes Harry.  “JFCS is such an efficient, professionally run organization. I’m continually impressed.”

“After Harry served on the board for many years, we know the strength and dedication that JFCS brings to community service.  The endowment staff are experts and make it easy to support charities through our Donor Advised Fund.”—Judy and Harry Cohn, 2014

In response to the changes to the tax laws effective as of January 2018, Judy Siegel Cohn chose to set up a second Donor Advised Fund, with this one bearing her name, at JFCS.  Through this new “mini-foundation” and one established previously by her husband, Harry Cohn, they together support the philanthropic causes they care most about—and also receive meaningful tax deductions.