“Service is an important part of our family values and our Jewish values,” says Scott Haber, who was elected to the JFCS Board of Directors in July 2021.

Growing up near Philadelphia, Scott observed his family’s active engagement in keeping their temple strong and supporting their community. “For my parents, the ethic of service was fundamental,” says Scott. “From childhood, I knew that giving back was part of life.” As a parent and leader, Scott has set his own example of service to the community. 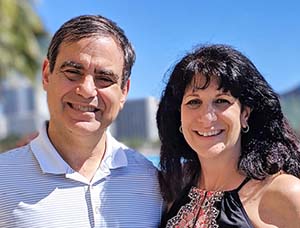 A graduate of Cornell Law School, Scott moved to California to join the global law firm Latham & Watkins, where he became a partner. Following a distinguished career focused on mergers and acquisitions, securities law, and corporate planning, Scott chose to retire at the end of 2016 to spend more time with his wife, Sherry, and their children, Ben and Cami. Retirement also allowed Scott to expand his volunteer roles.

Scott made it a priority to serve on nonprofit boards of directors throughout his legal career. With Sherry, he also volunteered with their children’s schools and activities, including the Boy Scouts and Girl Scouts, and in their Hillsborough community. In recognition of her volunteer leadership, Sherry was named the 2017 Hillsborough Citizen of the Year by the Associated Parents’ Group. Today, Scott serves on the Board of Trustees of Berkeley Repertory Theatre, the Board of Trustees of Peninsula Temple Sholom, and the Board of Directors of JFCS.

Sherry and Scott’s involvement with JFCS dates back decades. Friends introduced the couple to the agency shortly after they moved to the Bay Area in 1994. The agency’s comprehensive services and role in the community immediately drew their interest, and they have been supporters ever since, making annual gifts and frequently attending the Fammy Gala. Their son, Ben, participated in YouthFirst’s summer internship program for college students, gaining valuable workplace experience.

The couple increased their involvement by joining the Fammy Gala Committee and the Peninsula Events Committee and as members of the task force that helped to guide JFCS’ expansion of services on the Peninsula. When Scott was approached about joining the Board of Directors, he was eager to become involved in JFCS’ work at a higher level.

“I always am so impressed to learn about yet another vital service that JFCS provides,” says Scott. “From direct services to the Holocaust Center to the public policy advocacy work, it’s so impressive what the agency accomplishes with the tremendous support of our community.”

Scott’s appreciation for the expert, loving care that JFCS provides for seniors expanded when his own father needed home care and assistance. His father’s local Jewish human services organization was there for them. “It was so meaningful to know someone who cared was with my father when we were far away,” he says. He understands how adult children in similar situations rely on JFCS to care for their parents like family.

As a member of the Board of Directors, Scott is enjoying the chance to learn more about JFCS’ services, including as an active participant on the Program and Planning Committee. We are grateful for his wise guidance, insightful contributions, and deeply rooted, heartfelt commitment to caring for our community.