A parent’s most important job is keeping their child safe. Imaging being unable to do that.

Ellen and her 12-year old daughter Sari, were referred to JFCS by a homeless shelter following a violent attack on their lives by Ellen’s husband of five years. When they married, he promised to protect and care for Ellen and her child, but in a chilling turn, he developed a drug addiction and became their worst nightmare. 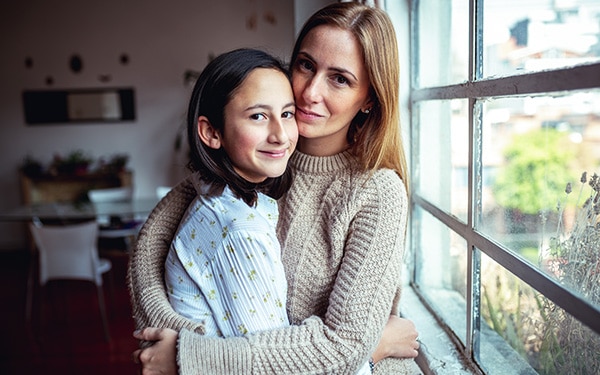 Emergency services are a lifeline to women and children in crisis.

While much of the abuse was directed toward Ellen, Sari also became the victim of her stepfather’s abuse when she tried to protect her mother. Ellen fled with her daughter to a shelter. It was there that Sari experienced the effects of the trauma; she attempted suicide to stop the pain.

While not all cases are as extreme as Sari’s, the rates of depression and suicide among young people are increasing at an alarming rate.  Since 2009, depression rates among 12- and 13-year-olds increased by nearly 50%. Suicide attempts more than doubled.

Domestic violence numbers are staggering as well. One in three women and one in six men—of all socioeconomic groups, races, genders, and sexual orientations—will experience some form of domestic violence in their lifetime. Too often, women and children find themselves having to flee horrifying trauma without anywhere to turn.

Through comprehensive emergency services and the JFCS Dream Program, hundreds of families of all faiths and backgrounds have been able to rebuild their lives. Victims of family violence are given the tools they need to begin to heal from their abuse, learn new skills, regain their footing, and achieve their dreams of independence and security.

For Ellen and Sari, JFCS’ expert clinicians and case managers were able to help meet their emotional and financial needs. Ellen received emergency assistance to cover a deposit on an apartment, counseling services, and help finding employment. Sari began psychotherapy through JFCS’ Center for Children and Youth. There, she gained the coping skills she needed to return to school after a long absence, reengage with peers, and overcome the horrifying effects of the domestic violence she had experienced.

“JFCS saved our lives,” Ellen says. “Now we have a fresh start.”

You Can Make an Impact

Ten new crisis cases come to JFCS daily, and only 30% of clients can afford the full cost of services needed. Thanks to the incredible support of our donors, JFCS is able to continue providing this life saving assistance when it is needed most.