JFCS is pleased to offer an inspiring educational experience to emerging Jewish leaders of the Bay Area through the JFCS New Leaders Fellowship. The nine-month Fellowship provides distinguished young adults a unique training in nonprofit governance through the lens of JFCS’ mission and expertise as a human service agency. JFCS Fellows grapple with critical issues facing the Jewish and wider community and dive into key tenets of nonprofit management, while building a collaborative community of peers. 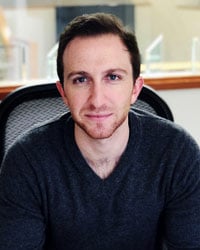 Aaron Tartakovsky is Co-founder and CEO of Epic CleanTec, a San Francisco-based green technology startup that is redefining urban wastewater recycling. In 2017 he was recognized as a GreenBiz 30 under 30 honoree. Aaron is deeply involved in the Jewish and pro-Israel communities, including with JFCS, where he helped found the 3GSF group, and with Tel Aviv University, where he serves on the Board of Governors. A longtime pro-Israel activist, Aaron is currently the lay leader responsible for coordinating San Francisco’s pro-Israel political network. 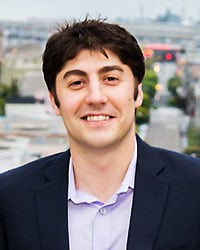 Alex is a Managing Director at Javelin Venture Partners, where he has led investments in companies like Thumbtack, MasterClass, Kindly Care, Rinse, Clutter, Stensul, and Estimote, amongst others. Prior to Javelin, Alex was a Principal at DFJ Aurora, one of the first US based venture funds focused on Eastern European tech investing, and a co-founder of ooma (NYSE: ooma). He received his MBA at the Stanford Graduate School of Business, and has a B.S./M.S. in Management Science and Engineering and a B.A. in International Relations from Stanford University as well. Alex is originally from Odessa, Ukraine, and currently lives with his wife and son in Lower Pac Heights. 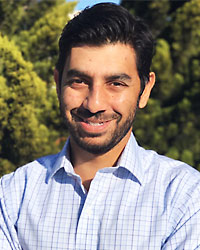 Amir is a Business Strategy and Operations professional. After pursuing a career as a management consultant with McKinsey and Co., Amir transitioned to operational roles with leading tech companies. Today he works with Google and lives in San Francisco. Born in Israel, Amir holds an MBA from Duke University and a BA in Economics from Tel Aviv University.

Ariella recently relocated from Los Angeles back to the Bay Area after finishing graduate school at Pepperdine University. While in Los Angeles she was involved with the Jewish Federation of Los Angeles and completed the CLI leadership fellowship. She was also a member of the Guardian Young Professional group, which raised money for the elderly home in Tarzana, California by hosting philanthropy type events for young professionals on a quarterly basis. Ariella looks forward to continuing her leadership journey by joining the JFCS fellowship, sharing her experience and collaborating to engage the young professional community in San Francisco. 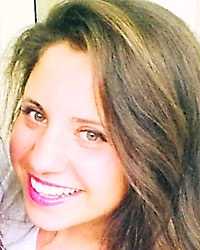 As an immigrant to Canada, Beata was raised with ties to the Ottawa Jewish community where she learned first hand the value support can provide. She graduated from Carleton University and began working around Europe, first in public policy before moving on to policy for a large technology company. After years living/working in seven countries, she’s now settling down in San Francisco where she is rebuilding her roots in her local community. 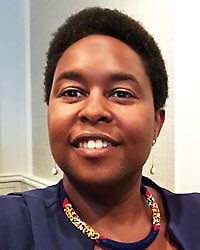 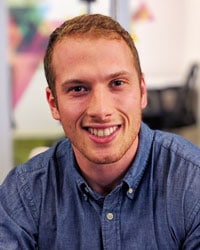 Dan Altman grew up in Connecticut and studied Public Policy and French at Duke University. He currently works as an Account Strategist at Google, and spends much his free time working on refugee, immigration, and political projects. He enjoys tennis and learning fun phrases in new languages. He currently lives in the Duboce Triangle neighborhood of San Francisco. 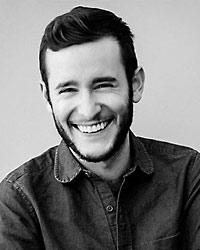 Daniel Wein is the communications lead for Facebook’s Education Modernization team, where he helps to build equitable computer science education initiatives for youth. Coming from a background in progressive politics and pro-Israel political activism, his passions extend into facilitating LGBT inclusivity efforts and finding ways to effectively engage with those on the margins of our community. Daniel is the co-founder of Moishe House NoPa and an avid traveler, having visited and toured Jewish communities across more than two dozen countries. 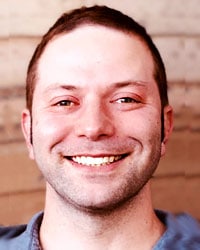 Eli Salomon is CEO of Voga Coffee, maker of Ground Control, the first batch coffee brewing technology to market since the automated drip brewer was introduced in 1954.  Voga’s newest product, Ground Control Cyclops, was awarded the Specialty Coffee Association’s Best New Product Award. Eli sits on the boards of numerous non-profits, including CYCO, the world’s oldest Yiddish bookstore, and he is the Immediate Past President of the Harvard Club of San Francisco.  Eli received his MBA at the Wharton School, University of Pennsylvania, his JD from Harvard Law School, and his BA and MA in Mathematics from Johns Hopkins. 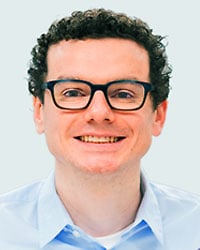 Elliott is a software engineer at Google where he leads engineering on Grasshopper, a free mobile app that teaches coding to adults to improve their job prospects. Previously he worked on the Chrome web browser ensuring the web is a thriving ecosystem of free information. Outside work he’s a big foodie, an active member of Congregation Sha’ar Zahav, and loves learning about cooking from his wife, Rachel. 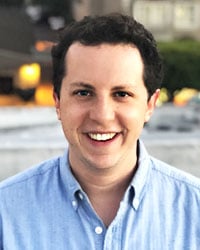 Ian Solomon grew up in the Maryland suburbs where he attended the Charles E. Smith Jewish Day School and then studied communications and marketing at the S. I. Newhouse School at Syracuse University (and performed as the mascot “Otto the Orange”). He has lived in San Francisco for over 5 years and currently works in sales at the sensor and fleet management technology company, Samsara. 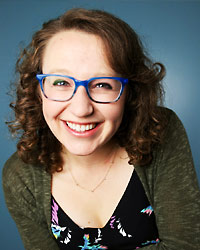 Jessia Hoffman is a Bay Area-based educator, improviser, freelance writer, and communication coach. She graduated from Stanford University with a B.A. in English, minor in Spanish, and Interdisciplinary Honors in the Arts. Jessia has taught, developed, and supported arts programming for a plethora of organizations (TheatreWorks Silicon Valley, Signature Theatre (NYC), BATS Improv, Collective Capital, Stanford Storytelling Project, Stanford Improvisors) and aims to use theatre as a vehicle for social change and civic engagement. 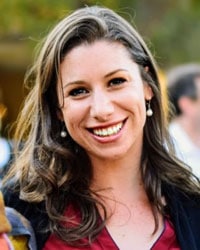 Jessica Goldband is a Senior Product Manager at Doctor On Demand, a health technology company in San Francisco. Prior to joining Doctor On Demand, she worked at two early stage health tech startups and interned for the African Refugee Development Center, in Tel Aviv. Jessica earned her Masters in Public Health from Columbia University and a B.A. at University of Denver, where she served as president of Hillel. She grew up in Palo Alto and currently lives in San Francisco. 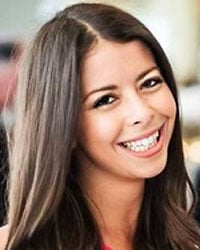 Kaley Diamond is a proud Bay Area native, who grew up in Marin County and attended the Urban School of San Francisco before heading to Oberlin College where she studied Sociology. Passionate about philanthropy and giving back, Kaley spends her days at Salesforce.org working on their Philanthropy & Engagement Team. 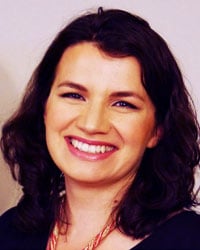 Natalie Zayats was born in Ukraine, lived in Israel for 20 years, and moved to Palo Alto with her husband and three kids 7 years ago. A seasoned professional, she currently works as a Data Science Manager at PayPal. Natalie loves learning new things, exploring new places, and meeting new people. She is very excited to be part of the JFCS New Leaders Fellowship 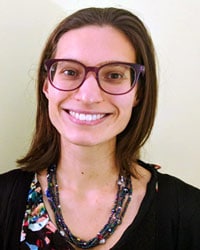 Rachel is a hardware engineer at Google where she designs Chromebook laptops. She is relatively new to Judaism, but has become an active member of Congregation Sha’ar Zahav, where she likes going to services and serves on the board. In her spare time, she likes running, cooking, and walking in San Francisco with her husband, Elliott. 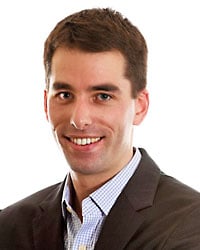 Robert Kaufman grew up in Manhattan Beach, CA and studied political science and business administration at the University of California, Berkeley. Robert currently works for FTV Capital, a growth equity firm in San Francisco. Prior to joining FTV, Robert worked for The JBG Companies in Washington, D.C., Hellman & Friedman, and Hall Capital Partners in San Francisco. Robert is president of the board of Berkeley Hillel, a member of AIPAC’s National Council, and a Birthright Fellow. 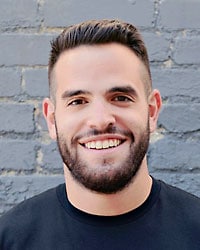 Sam Smith is currently a Principal in Vaco’s San Francisco office, where he manages a portfolio of technology companies, and focuses business development, strategic guidance, business process outsourcing, managed services, and trust and safety issues. Sam holds a JD from Georgetown University Law Center, and a BA in Political Communication from The George Washington University.  When not at the office, Sam can frequently be found at the gym, where he coaches Crossfit, Olympic Weightlifting, and Powerlifting courses, out on a motorcycle, or on the golf course. 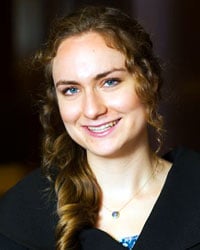